Buoyed by their 10-2 annihilation of Ollies last time out the indomitable Team Rileys make the trip to Prem One strugglers Smurfs looking to pile further pressure on title favourites Replay. Smurfs have yet to taste victory following their promotion-winning campaign the previous season. But with the likes of Ray McPhee in their ranks the Winds-based outfit cannot be underestimated….

The first frame is a scrappy affair between Andy Morrison and Nick Powell, resulting in bag covering galore.  Morrison plays the deliberate foul, but makes the mistake of leaving a foul snooker.  Powell pots one of his opponents balls, then plays the double on his penultimate yellow while moving the final problem ball – all is going well as the double drops, but disaster looms as the black comes to our blue friends rescue to leave Powell snookered.  The commentator says “unlucky” – luck is a matter of perspective and this remains debatable.  Powell escapes the snooker but his final ball is still not pottable, and Morrison now turns the screw.  With two shots in hand Morrison mops up, including a great positional shot from final ball to black.  1-0 Smurfs. 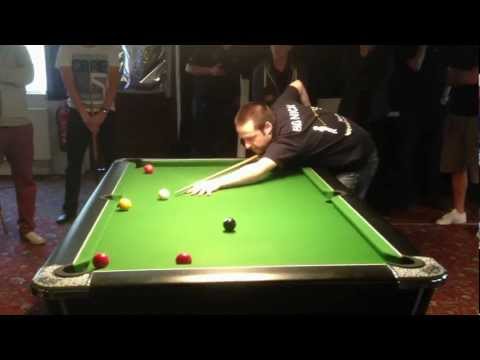 Dom Mills is charged with getting the Rileys boys off the mark against pretend Andy Jones.  The clearance looks on for Jones until a massive kick stops him in his tracks.  Mills balls are nicely placed (oo er Mrs) and when the opportunity arises a few visits later, he looks on to clear up.  A slack positional shot leaves a tricky cut and the chance is gone.  Jones steps in, and to the background music of Babybird and Ash makes no mistake, to give the home side a 2-0 advantage, which mirrors the first half of the season clash. 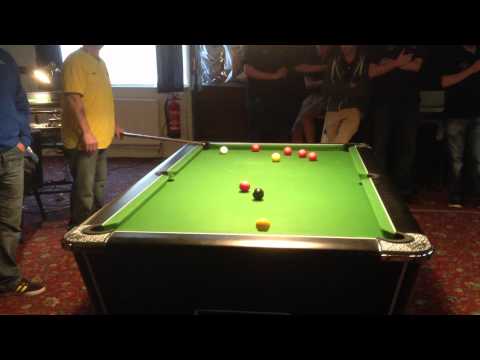 Next up is Steve Lindley vs Jason King, and the Rileys boys badly need to register their first frame of the night to reduce mounting pressure.  No idea what happened early in the frame, but Kingy goes for the clearance, resulting in increasingly ridiculous potting, ending with a double off the top cush into the middle bag at pace.  The congratulations come Kingy’s way, however he is uncharacteristically slow to blag that he went for said double, and the Smurf’s advantage is halved. 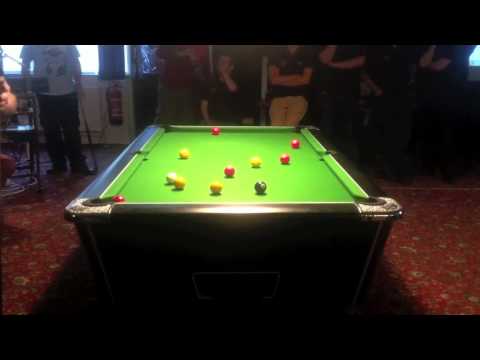 Ever reliable Dave Walker steps up next, and the early signs are not good for Bubba Watson’s doppelganger.  However, a miss arrives and Pubby steps in to make no mistake, including a perfectly judged cannon that makes the clearance a formality. 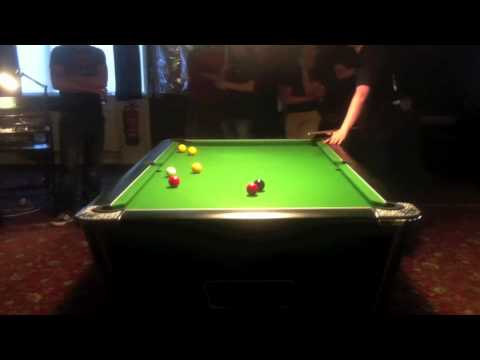 So, with parity restored the real Andy Jones steps up.  A good break off leads the Riley’s boys to believe this could be a quick kill, however Jones’ base instincts kick in and he covers the black pocket with his ball.  You can almost hear the collective sigh even from those people outside having a fag.  Jones remains in control pretty much throughout, until he belatedly picks off his last two balls followed by a cheeky black which glanced his opponents ball.  Riley’s are finally on the right end of an uneven scoreline. 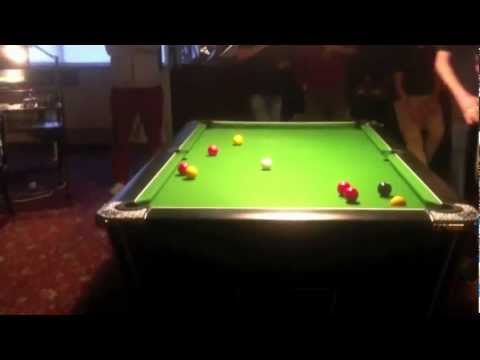 Steve Pardner is next into the breach – and it is another protracted frame, eventually.  The Smurfs are in first again and Stevo has a look of resignation on his face – this would not be the first time this season that he has stood cock, i mean cue, in hand and not been able to put his wood to use.  Lancashire clears all his balls but fails to get on the black to the middle, and is left with the only option being to put it as near as possible to the corner pocket.  Another fudgefest ensues.  In the final shot of the frame Lancashire goes for a debatable pot and is judged to have hit his opponent’s ball before making contact with the black, the black drops, frame over.  On the VT it looks a closer call than it did live, but I think the correct decision was made.  Pest takes the plaudits to bring the half time score to 4-2.  Pest doesn’t look ecstatic – what will his face be like when he hears the commentating and he is likened to none other than his arch-nemesis Danny ‘the moan’ Shone? 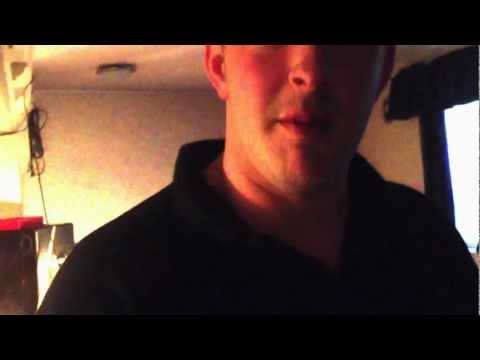 Stu Blackmore is tasked with getting Smurfs back into it against Riley’s Kyle Wilson.  Blackmore is first to get his hand on the table but with the balls spread but tricklily placed breaks down with 3 off his yellows still on the table.  Shortly after Blackmore finds himself back at the table after the Nonimator goes in off, his safety net of a second is sacrificed in putting his one tricky ball over the pocket, and the clearance now looks on, unfortunately a slightly poor final positional shot goes awry and Riley’s are still in it.  Now it is Wilson’s opportunity to mop up, and after negotiating some tricky pots the black is a bridge too far.  Wilson is fortunate to leave it safe after the attempted pot, but on his next visit goes for the double/treble/quadruple – he misses on two counts, but does get the treble. 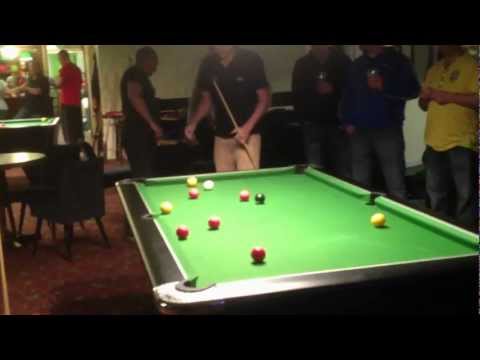 Andy Morrison is back on against Team Riley’s Captain Fantastic, Bob Grant in frame 8.  Morrison with the break, and a nice split, the dish looks tricky but possible, with the major hazard being a ball near the middle bag that will only go into the bottom corner.  He bails on the dish in favour of the fudge, but the red down the line is too good/bad and it drops.  Morrison is all in now and downs another red knowing he is cannoning into balls.  Now he is in trouble, but pots his penultimate ball which is hanging over the pocket, knowing he can’t get on the last.  Morrison opts for the deliberate foul, and it is over to Captain Fudge.  Grant knocks in some good pots, before settling for the snooker.  Another deliberate foul later, and the Riley’s man is back at the table, with some intelligent pool he picks his balls off before slotting the black into the middle in a composed finish. 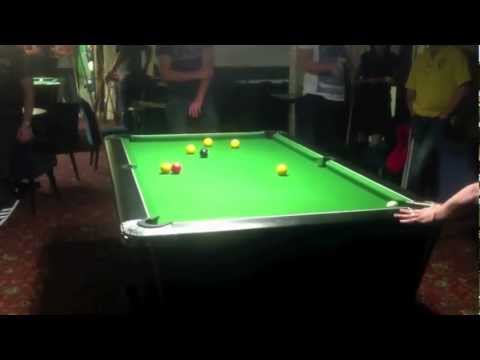 Dave Walker is back to the crease, hoping to get Riley’s up to the magic seven. 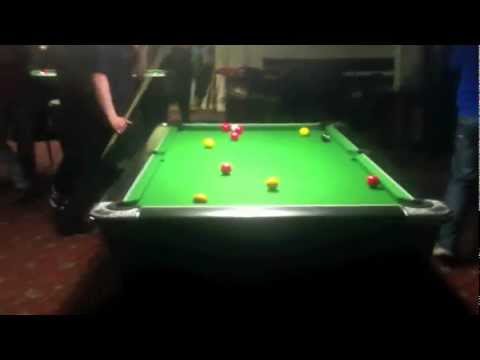 It is the other Andy Jones versus Jason King now.  A poor break off or a poor rack leads to the balls barely breaking up, and all signs pointing to a drawn out affair in frame 10.  Each player picks off some of their balls until both are left with two balls each and an arm wrestle for surpremacy ensues.  Kingy is left with a tempter into the bottom bag, with Jones knowing a miss all but gifts him the frame, however the pot wipes it’s feet, as does a similarly tricky final ball, and the black along the cush is routine.  Yes the King!! 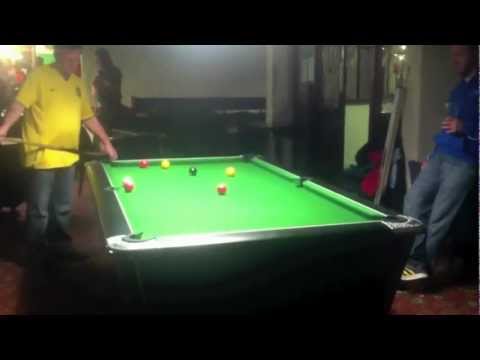 The real Andy Jones is back in to bat now.  It is a predictably tactical frame with Jonesy playing the per centages.  As things begin to open up Jonesy resists the temptation of going for the clearance until the perfect moment arrives when he snaffles his last couple of balls followed by the black.  Contrary to public opinion frame 11 was also played in the Winds and not in some alternative reality where pool is played underwater – those of a seasick nature should give the video a miss. 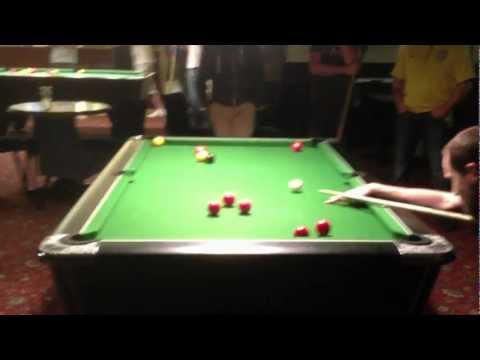 Steve Pardner is in for the final frame of the evening against Steve Lindley.  It is a good break off by Lindley, and he can consider himself a little unfortunate to come up dry.  The Pest gets to make his choice of which balls lie best, with traffic being the major hindrance to the clearance.  As the commentator said, whoever that was, there was the odd questionable shot selection, but there is more than one way to skin a cat.  Jesting aside, it is a good clearance, unfortunately on his last ball Pest gets into the cue ball just a touch too much, and cuts off the potting angle on the black.  The double does not scare the pocket, and Lindley clears up in clinical style, to give the little blue dudes a touch more respectability. 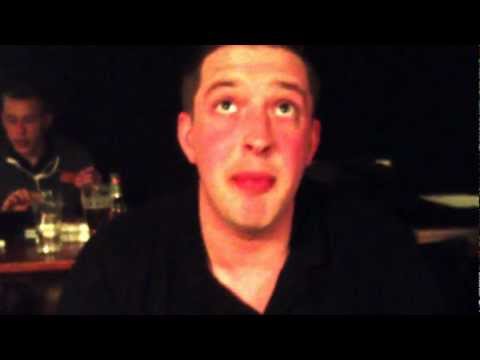